Miles Woodruff: former DVC student in PhD program in UK and working with Jane Goodall Institute in the Congo 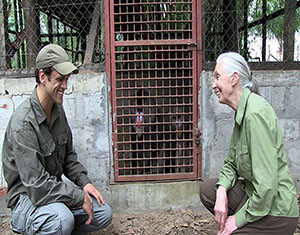 He’s studied business management and culinary arts, religion and philosophy, sustainable business and leadership. He has worked on sustainable agriculture and insect management in Nairobi, Kenya, and co-managed a 3D laser survey team during planning stages for the San Francisco Exploratorium and SFO Terminal 2.

Most recently, he’s been living in the forest in the heart of the Africa’s Republic of Congo, studying and working with chimpanzees and mandrills for the Jane Goodall Institute.

Miles Woodruff is a man with many talents, a lot of energy, and a drive to make a difference.

Born in Honolulu, Hawaii, Woodruff spent a large portion of his youth in the Bay Area, attending kindergarten and elementary school in San Ramon and Acalanes High School in Lafayette. He moved every three years throughout his youth but considers the Bay Area his home.

Woodruff attended Diablo Valley College from 1998 to 2002, majoring in business management. “I knew I wanted an education, but I wasn’t yet sure what I wanted to do with my life,” Woodruff explained. “DVC gave me the platform to try out various paths at a reasonable cost so I could figure out what I did and didn’t want to do.”  He returned to DVC in 2008 to take some classes just for fun, including Aikido, Aikido Weapons, Jujitsu, Conversational French, and Salsa and Latin Dance.

In 1999, while attending DVC, he also went to work as an applications engineer at Leica Geo Systems HDS in San Ramon. There he worked internationally as a Cyra consultant, performing technical demonstrations of hardware and software and instructing customers in the implementation of new field procedures specific to their applications in business

He transferred without a degree to the Culinary Institute of America in Hyde Park, New York, where he earned an Associate degree in Occupational Studies. While there, he was exposed to sustainable/organic growing practices and was taught about the negative effects of GMO’s and pesticides on the body.

From 2005 to 2009, Woodruff was the national sales manger for Allen and Company of Martinez, where he aided in the development, marketing and sales of new products into mass grocery, health food distributors, Wal-Mart and other large retailers.

Also during that time, he transferred his DVC coursework credits to JFK University in Pleasant Hill, where he earned a BA degree in Philosophy and Religion in 2008. “While completing my undergraduate degree at JFK, I took a sustainability class which gave me an exposure to many different aspects of sustainability at a surface level,” Woodruff said. “At that point I began thinking about sustainable impacts of my actions and consumer choices. Being into sustainability and food, I happened upon Jane Goodall’s book Harvest for Hope. This book made me want to take action, but I didn’t really know how to focus my energy.”

Then, in 2008, Woodruff’s life was changed by meeting Jane Goodall. “I visited my father in Pointe Noire, Republic of Congo,” Woodruff said, “and we had the opportunity to share some meals with Jane Goodall. Dr. Goodall helped me realize that a normal person can tackle major problems and, with persistence and dedication, have a large impact. She encouraged me to leave my Bay Area business and get my feet wet in the Congo.”

Shortly after this meeting and after earning his degree at JFK, Woodruff sold his business and from 2009 till 2010 he worked as a research assistant at the chimpanzee sanctuary HELP Congo in the Republic of Congo.

“During that time,” he continued, “I demonstrated that I worked well with primates, learned quickly, had the grit to live in the forest for extended periods, and was able to manage with constant change. For the first three months I was a keeper for chimps on three separate islands. I then worked in the forest for nine months with released chimps in the same park I’m working in now.” He managed small field teams while collecting primate behavior data, fed the island chimpanzees twice daily and performed basic veterinary tasks.

After working for HELP Congo, Woodruff studied sustainable business at Presidio Graduate School in San Francisco for a year before transferring to Dominican University of California’s Green MBA. He took additional training in 2011 through an ICEPE and BioVision meeting on sustainable agriculture and insect management practices in Nairobi, Kenya. In 2011 he also worked as field manager for Inovtec in San Ramon, where he co-managed the 3D laser survey teams.

“Then, in the middle of my Green MBA, I was offered the position of running the mandrill release and decided to conduct conservation work and put the degree on hold,” Woodruff explained.  “The country manager for the Jane Goodall Institute asked me to help them with the mandrill release.”

So off he went in May 2012 to return to work on the Goodall Institute mandrill reintroduction project.

“I am currently the principal investigator for the mandrill reintroduction project at the Tchimpounga Chimpanzee Rehabilitation Center in the Republic of Congo,” he said. He is also currently enrolled in a doctorate program in Biological Anthropology at Durham University in Durham, U.K., one of the top 10 universities in the U.K. He is researching the correlation between fecal cortisol metabolites and stress-related behaviors in mandrills, and is also working on the function of GPS radio collars in dense forests and the feeding ecology and social behaviors of mandrills in the wild.

“Under the supervision of my advisors at Durham University (Jo Setchell and Russ Hill) and in collaboration with the sanctuary managers at Tchimpounga, I developed and maintain reliability on the methods we are using in the research surrounding the mandrill reintroduction,” Woodruff said. “I also help manage the staff at the release site and aid in the care of the mandrills and chimpanzees I work with.”

(For more information on the work he is doing in the Congo, this blog provides an overview of the mandrill release: http://www.janegoodall.org/blogs/mandrills-releasing-some-tchimpoungas-residents-back-wild )

How does he adapt to all these life changes?

“I moved every three years throughout my youth,” Woodruff explained, “so I am good at adapting to change.

“When I moved to the Congo the first time,” he continued, “I had already lived in South Africa for a bit and had visited the Congo on vacation. I had some vague idea of what I was getting myself into. I had also already met the people I would be working with on my first visit.

“The Congo is so different from the Bay Area,” he continued, “that it’s not really about adjusting to life in Congo; instead, it is about shifting from one reality to the other. It is a very abrupt shift to go from the US to the Congo. In the Congo I speak mostly French, eat different foods, wear different clothes and primarily live in a tent. Every day is filled with new adventures and challenges. There are different cultural rules to live by here in the Congo, and different rules even still between the cities and the forest.”

“I visit Durham University in Durham, UK twice a year, and try to get back to the States once a year,” Woodruff said. He has about three years left in his PhD program. Once he completes his PhD, he plans to go back and finish the last year of his MBA degree in sustainable enterprise at Dominican University of California.

And after that, who knows? But one thing is for sure: his life will never be boring.