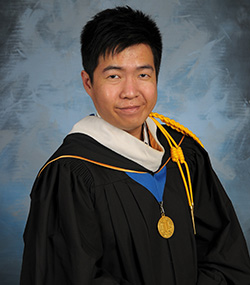 From Malaysia to DVC to New York City and Columbia University, Xi Zhi “RC” Lim’s life thus far in his 21 years has been about making the most of opportunities.

Lim was born in Malaysia and raised in Kuala Lumpur in a “self-made, more privileged” family. For most students in Southeast Asia, Lim said, coming from a privileged family would mean his schooling, his career choice and his life would have been planned out by his family–with little consideration for his wishes or desires.

“My parents have provided to me much guidance and support, but never in the kind of ‘back door’ ways. They never ‘got’ me an internship at prominent companies or ‘made phone calls’ when I applied to colleges or graduate schools. Instead, they showed me support by always standing by my decisions, and they believed that my greatest achievements would come from doing what I think I do best. This is not common in most parts of Asia, as parents of privileged families usually plan out their children’s lives for them. I am grateful for my parents’ trust in me.”

When he was in high school, Lim said, “I strongly disagreed with the rigid and memorization-based Malaysian secondary school curriculum. Halfway through high school, smart students are expected to proceed into the science stream (physics, biology, chemistry) and the rest to either the commerce stream (accounting, economics) or the arts stream (painting, literature). I chose the commerce stream. Some of my high school teachers never believed that I would one day achieve anything great.

“When I graduated from high school,” he continued, “my intent was to advance my studies in a place that adopts the kind of education philosophy I agree with (less memorization, more actual understanding, adaptive to a changing world), and the United States was an obvious choice. Even though that meant I would need to start from the ground up, I chose DVC.”

He enrolled at DVC in 2010 and attended for the 2010-2011 and 2011-2012 academic years, majoring in business. He also was an ASDVC board member, and through that was able to participate as a student representative on the Integration Council. He was twice awarded the ASDVC “People’s Choice Award.”

“DVC provided a lot of opportunities to me through student government and college governance,” Lim said. ”Through my participation in college committees, I met many people who truly cared and worked hard for the students. Their effort touched me and motivated me to one day bring pride to DVC, and especially to the people behind the scenes.

“During that time,” he continued, “the Integration Council had just started making funding recommendations to the DVC president. We read Program Reviews and went through the process of ranking requests for funding.

“Since I wasn’t a 4.0 student, participation in the student government and college committees helped me get into UCLA,” he added. “If it weren’t for the staff and faculty who gave me– a student– real opportunities in college committees, I probably wouldn’t be at UCLA now and likely not getting into top PhD programs.”

Lim transferred from DVC to UCLA in 2012 and will complete his BA in business economics in June, graduating with College Honors, Departmental Honors and Dean’s Honors List. When asked how he thought DVC had helped to prepare him, he replied, “Well, I was ranked first in an upper division econ class (Microeconomics Theory, about 220 students) during my first quarter at UCLA, and recently again in an upper division math class.”

In the fall Lim will enroll in a doctoral program at Columbia University to pursue a PhD in economics.

“I received admission offers from UC Berkeley, Northwestern, University of Pennsylvania, UCLA, Columbia, and University of Wisconsin-Madison for candidacy in PhD in economics,” he said. “Most of them come with fellowship offers, and I will be attending Columbia with a full fellowship, which includes five years of tuition waiver and stipend, health insurance and subsidized housing.

“I chose Columbia because it is doing really well in recent job market placements. This year, their graduating PhD students in economics are hired to become researchers or faculty at top universities such as University of Chicago, Harvard Business School, and UC Berkeley. Of course, another compelling reason to go to Columbia is to be with my girlfriend, Jessica Judianto, who is going to live in NYC for the next few years as she pursues a degree in fashion design at Parsons. I met her during my first term at DVC, and we transferred to UCLA together. She has accompanied me a long way.”

At this point, Lim said, his plan is to eventually become a researcher/professor in academia, tentatively in the fields of microeconomic theory and applied microeconomics. “I am interested in the concept of endogenous preferences, which argues that people’s preferences (how we value things) depend on the economic environments in which they live.

“In terms of life goals or dreams, it is hard to say!” he said. “For someone of my age, the world is changing so fast that it seems nothing long-term can be said with great confidence. The one goal that seems to be fixed, though, is to maximize my potential and to realize it to the greatest extent. For now, while the long-term is unforeseeable, maximizing my potential in the short-term means do well in grad school and become faculty at a top program when I graduate.”