Ruth Michael has the courage to dream 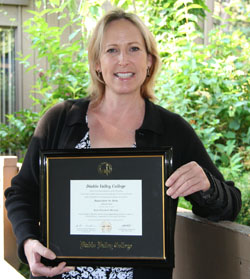 Ruth Michael had plans for her life. She wanted to go to college, and in her senior year of high school had been accepted to a number of universities.

"I thought I must be having a bad dream," Ruth said, " but the tears on my face were real, and our world had been shattered." With a younger brother and sister at home, Ruth knew that her first priority was to stay home to care for them and her mother.

"During that time," she said, " I was unable to do anything but live from one day to the next." Days turned into weeks, weeks into months, and months into years. On December 17, 1983, Ruth's mother died.

As much as she wanted to go to college, Ruth said, " I have never regretted my decision to spend that time with her and my family. The lessons I learned through my heartache were priceless, the kind of lessons only life itself can teach you. If I had not experienced my mother's illness and death as a teenager, I often wonder if I would have had the strength and courage to cope with the second major illness that entered my life."

Ruth married and had two children. Then, on December 17, 1997- exactly 14 years to the day that her mother had died- Ruth was diagnosed with Severe Systemic Lupus Erythematosus (SLE), a serious chronic illness for which there currently is no cure. It initially involved her kidneys and central nervous system (CNS).

The days following her diagnosis were a blur. She was heavily medicated, and prednisone left her wired and tired. She began to swell, and soon became unrecognizable to those who knew her. She was on oral chemotherapy drugs to suppress her immune system and fight the disease.

Then she began to have severe head pain and nausea, and a brain MRI and spinal tap indicated Lupus Meningitis, a life-threatening condition.

Though worried that her mother's fate would become her own, Ruth did not want to leave her husband alone with their two sons and have them know the heartache of growing up without a mother. She chose to fight.

She underwent months of treatments, during which time she suffered a minor stroke that left one side of her face numb for nearly a year.

"I remember seeing the wind and watching the leaves move in the trees, but not being able to feel the breeze on my face," she recalls. "I wanted to run and play with my boys like other mothers did, but just taking a shower was exhausting. Everything was so painful and took so much effort. Sometimes I just wanted to die because the pain was so great." But again, she chose to fight.

In recent years, she has had serious lung involvement which was successfully treated, has endured numerous painful infections, and was diagnosed and had surgery for avascular necrosis of the wrists- a condition which causes small bones in the wrist to die due to insufficient blood supply.

"I wish I could say that the story ends with a cure, or that I went into remission and lived happily ever after, but I can't. I still struggle with this disease on a daily basis."

Through it all, however, she has held onto her dream of graduating from college.

"I'm glad I didn't have a crystal ball to see into the future, because I'm not sure I would have had the courage to face it," she said. She didn't grow up dreaming that her marriage would dissolve, or that she would face illness and heartache.

Nor did she dream that at age 39, a single parent of two young boys, she would enroll at DVC.

"It can be challenging to be a primary care giver and attend college while living with Lupus," she said.

But her sons Drew and Deven, now ages 12 and 13, support her dream to complete her education, just as she supports their dreams, even though it has meant making some very difficult financial decisions so she could remain in school.

"They are committed to education, and believe that it will provide better opportunities for us as a family," Ruth said.

Ruth completed her A.A. degree in Liberal Arts studies with honors at DVC in December of 2007, and in the spring of 2008 completed her transfer requirements with honors for California State University East Bay. She has now transferred to Cal State East Bay to complete her Bachelor of Science in Business Administration, with a focus in Human Resources.

"I believe that my gifts and talents, combined with my personal and professional experience, will provide me with wonderful employment opportunities," Ruth said.

"Lupus changed my life, but it has not nor will it defeat me" she said. "In some ways, it has given me the courage to dream and has been my inspiration for change. I am grateful for such clarity in my life; living with lupus has helped me prioritize who and what is important to me. I am grateful for my children, and for my loving family and friends who encourage and love me."