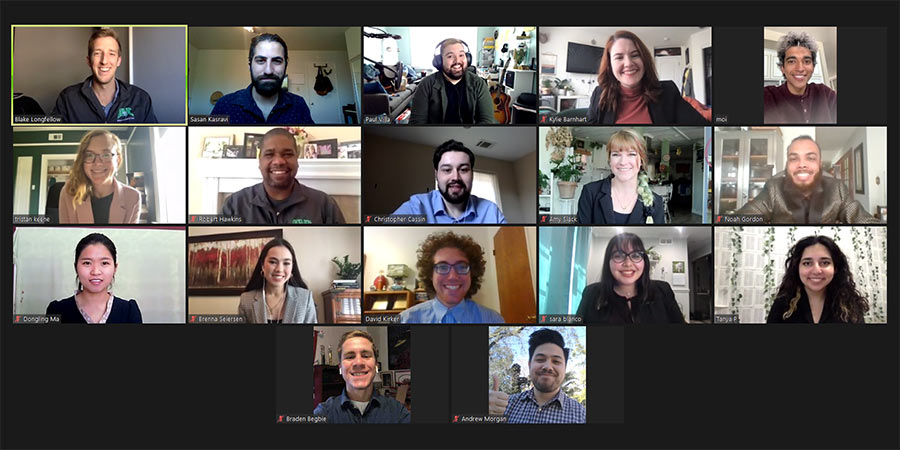 This marks not only the first time in DVC’s history that the team has won the State Championship, but also the first time for any school in Northern California in more than 45 years.

Fifteen students, each with multiple speech and debate events, competed in a four-day online tournament involving head-to-head debating, public address, limited-preparation speaking, and dramatic performance. In addition to the team as a whole earning the title of State Champions, many individual competitors were recognized for their competitive accomplishments. DVC competitors filled all of the top three spots in the individual speaker rankings, and made up six of the top 10 speakers in the state.

Diablo Valley College is proud that this historic team is composed of students from a robust diversity of ethnic backgrounds, ages, physical abilities, English fluency, and beliefs. Throughout its long history at DVC, the Speech and Debate team has served as a platform for students from all backgrounds to use their voice to be advocates for the issues most important to them.

The many issues tackled by this year’s State Championship team ranged in style and topic, from speeches on anti-Asian discrimination and the objectification of people with disabilities to poetry performances on the dangers of criminalizing sex work and black culture in art. Speakers in limited-preparation events won rounds with answers to questions such as, “Will Elizabeth Warren’s ‘Ultra-Millionaire Tax Act’ ever make it to Biden’s desk?” Debaters on the squad advocated on behalf of a wide variety of social and political issues, in particular increasing access to immigration visas for women and others who are victims of interpersonal violence.

The success of this year’s team was made possible by decades of support by DVC’s administration. Under the guidance of AFA Dean Toni Fannin, students were very well supported by the college, including practice and performance spaces with high quality video and audio equipment set up by Laetitia McCollough from Art and Digital Media. Communication Studies Department Chair Robert Hawkins, along with generations of other former directors of the team like John Hanecak, Becky Opsata, and Patrick Moe, have continuously advocated for Speech and Debate students over numerous decades to ensure they are well supported, better coached, and able to focus on the competition with food and travel expenses covered. Robert Hawkins went as far as to coach several of the most successful speeches on the team on top of his new role as department chair.

The team was coached by Blake Longfellow, Paul Villa, Andrew Morgan, Robert Hawkins and Sasan Kasravi, with help from numerous colleagues and alumni who donated countless hours of coaching and judging to ensure the students were ready for success. First-year coach Paul Villa’s coaching contributions were particularly outstanding. Paul and Sasan form a debate coaching pair that at the State Championship advanced every single one of DVC’s 14 debate entries to the elimination rounds, something that's never been done before at that scale.

A full list of DVC’s awards at the California State Championships is listed below.