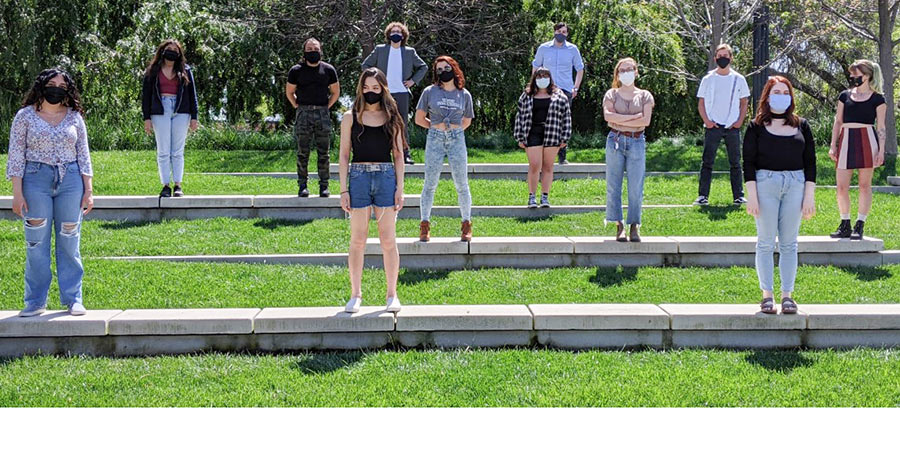 This marks the best performance in the school’s history and the best performance on record for any Northern California team at the Phi Rho Pi National Championships. The tournament awards “Gold” award to the top two schools in each entry size category, putting Diablo Valley College (DVC) second overall in the Large School division.

Fourteen DVC students competed online for six days in the tournament’s 11 categories of Speech, which include public address, limited preparation speaking, and dramatic performance, and three categories of debate events. Several students were recognized beyond just their in-round wins. Tanya Prabhakar, who received a full-ride Speech and Debate Scholarship to Western Kentucky University earlier in the season, received the Warren-Dahlin Student Fellowship Award, recognizing her impact on the community. Brenna Seiersen received the Bell Scroggins Award, which recognized her as best demonstrating the ideals of IPDA Debate among all students who competed at Nationals. Tristan Keene received the 2nd Place Overall Speaker Award, following her 1st Place Overall finish at the State Championships, after she became the first competitor in the tournament’s history to win Gold in all three Debate events at the tournament.

Diablo Valley College is proud that this historic team is composed of students from a robust diversity of ethnic backgrounds, ages, physical abilities, English fluency, and beliefs. Throughout its long history at DVC, the Speech and Debate team has served as a platform for students from all backgrounds to use their voice to be advocates for the issues most important to them.

In the “Speech to Entertain” category, Brenna Seiersen received Gold for her speech on anti-Asian discrimination and Kylie Barnhart received silver for her speech on the objectification of people with disabilities. Kylie, along with Noah Gordon, received Gold for their duo performance dealing with students of color in the education system, with Noah also receiving Silver for a poetry performance on black culture in art. Tristan Keene, Brenna Seiersen, and Richa Prabhakar received all three Gold awards in NFA-LD debate, advocating for increased access to immigration visas for victims of domestic violence.

The success of this year’s team was made possible by decades of support by DVC’s administration. Under the guidance of AFA Dean Toni Fannin, students were very well supported by the college, including practice and performance spaces with high quality video and audio equipment provided by Laetitia McCollough from Art and Digital Media. Communication Studies Department Chair Robert Hawkins, along with generations of other former directors of the team like John Hanecak, Becky Opsata, and Patrick Moe, have continuously advocated for Speech and Debate students over numerous decades to ensure they are well supported, better coached, and able to focus on the competition with food and travel expenses covered. Robert Hawkins went as far as to coach several of the most successful speeches on the team on top of his new role as department chair.

The team was coached by Blake Longfellow, Paul Villa, Sasan Kasravi, Andrew Morgan and Robert Hawkins, with help from numerous colleagues and alumni who donated countless hours of coaching and judging to ensure the students were ready for success. Paul Villa’s coaching contributions were particularly outstanding, with DVC’s historic success in Debate this season being largely owed to his efforts in just his first year coaching the team.

With many of this season’s competitors returning next season and sign-ups available to any student interested in joining, the DVC Speech and Debate team is set to remain a force to be reckoned with. Many of this year’s national finalists being walk-ons with no prior experience, anyone with an interest in improving their communication skills is highly encouraged to join the team by signing up for “COMM-163 - Forensics - Speech and Debate” for Fall 2021.

Director of Speech and Debate Blake Longfellow invites the public to watch their upcoming speech and debate showcases. On April 29th at 7pm the team will host “Speech Night”, an hour and a half long performance that highlights several of the team’s most successful speeches and interpretation performances. The following night, April 30th at 7pm, will be “Debate Night” which gives the stage to the team’s top debate competitors and demonstrates two different debate formats. Tickets for both events can be purchased in advance here:

For more information or to join, please visit the DVC Forensics Team website.

A full list of DVC’s awards at the California State Championships is listed below: