While noting how we got to this point in time of our nation’s history (and duly noting the many who came before us that tried to warn us about where we were heading), it is also important not to get mired in the 24/7 negative news cycle, bemoaning societal problems, fanning flames of division. We must focus on constructive solutions, especially ones that have potential to bring us together for the greater, long-term public good. To effectively do that, we need to think critically, listen compassionately, and speak carefully to one other before we act.

In one of Mickey’s recent books co-authored with Nolan Higdon, United States of Distraction: Media Manipulation in Post-Truth America (and what we can do about it) (San Francisco: City Lights Publishers, 2019), the authors identify four major public vulnerabilities in American society– that we have a pervasive commercial entertainment culture; increased hyper-partisanship; a fragmented media landscape; and an ineffectual education system. They address how these historically developed over the past 50 years, and in the final, chapter, they aim to “Make America Think Again” by offering numerous solutions involving critical thinking, media literacy education, social justice pedagogy, best practices for how to keep challenging conversations going, and much more.

Especially as we find ourselves in a contentious election year, during an unprecedented pandemic, we really need to embrace communications strategies based on critical thinking pedagogies and conflict resolution, not partisan bickering and confirmation biases. We need to reject notions of a “post-truth” era where “alternative facts” buttress “fake news” propaganda while seeking out and promoting factual, transparently sourced information. We need to revitalize our local news deserts with non-commercial, public interest journalism so we can rebuild public trust in our free press. And we need to embrace and truly support public education given the crucial role it plays in creating a just society. In the end, we need to come together to repair many of the fractured components of our civic sphere. In short, we need to Make America Think Again.

Mickey Huff is director of Project Censored, founded in 1976, and the president of the nonprofit Media Freedom Foundation. Since 2009, has edited or coedited the annual volume of the Censored book series with Seven Stories Press in New York and has contributed numerous chapters to these works since 2008. His most recent books include United States of Distraction: Media Manipulation in Post-Truth America (and what we can do about it), co-authored with Nolan Higdon, published by City Lights Books in San Francisco (2019), and Censored 2020: Through the Looking Glass, co-edited with Andy Lee Roth (2019). In 2019, he was recognized by the Society of Professional Journalists, NorCal Chapter, for their annual James Madison Freedom of Information, Beverly Kees Educator Award. He has co-authored essays on media and propaganda for several scholarly journals and news publications and helped script Project Censored’s latest documentary on fake news and critical media literacy, edited and narrated by Abby Martin (2020). 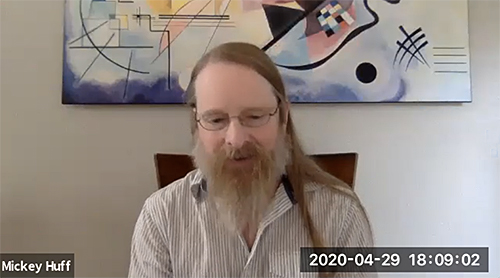