DVC Presents “The Future of the Commons” 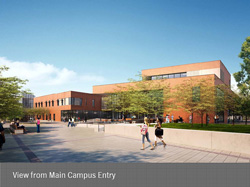 In a presentation to the community in spring 2010, architects from the Steinberg Group were invited to the campus to share their final plans for Diablo Valley College’s new Commons Project. View PowerPoint presentation

Building on the goals and objectives of the 2007 Facilities Master Plan, this project includes many campus-wide improvements like campus way finding, maximizing land use, improving pedestrian access, honoring the character of the DVC campus, creating new synergies and learning environments, welcoming the community, and providing universal access on campus. The project also replaces two of the oldest buildings on campus built in 1955 and 1956. 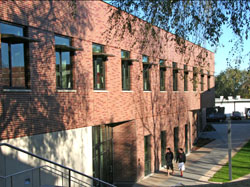 This project includes four primary program elements including Student Services, Food Services, Culinary Arts instructional programs, and the central campus quad. The building program elements are subdivided into two similarly sized structures. The subdivision and particular displacement of the buildings responds to two primary campus-wide objectives. First, dividing the project into two structures allows the work to proceed without a need for temporary relocation for any campus functions during the construction process. Second, the space created between the two structures is gently sloped to connect the two main central campus levels together. This public walkway connects the upper levels of the college to a single, larger central campus space, called the “Commons.” 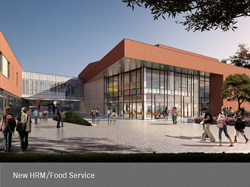 This design approach creates a true integration of building and landscape. Both structures are nestled into the hillside dividing the current quad level and the Language Arts level. As such, a “ground floor” is created on both upper and lower campus levels providing immediate access to visitors coming from either the east or west side of campus. The southern building will house the newly centralized Student Service functions of the college under one roof. The northern building will be the new home of Culinary Arts and the main campus Food Service facility and Cafeteria. The circulation and public functions within these buildings are oriented towards the central walkway to animate the experience of walking from one end of campus to the other, and to provide clear way finding for the building users.

“The Commons” will serve as the college’s major open space and heart of the campus. It connects all major east west pedestrian circulation paths, as well as the two main campus entries from parking lots 1 and 8. The Commons has been carefully designed to balance flexibility for small and large gatherings, with meeting areas, eating areas, and an informal stage that provides for a variety of functions, as well as shade and cool areas for respite from the hot sun. 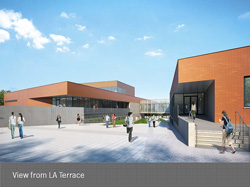 The entire project is a showcase for sustainable development, both inside and out. Many of the green features of the project are created out of synergies between the building and landscape including captured water runoff that is treated in storm water gardens, and re-using for plumbing within the building. This project is expected to achieve LEED Gold.

The Commons Project has been made possible by Contra Costa County voters through Bond Measure A passed in 2006. No program or state funds will be used in the construction of this project. This $52 million dollar project consists of 86,000 square feet of new buildings and approximately three and a half acres of a newly developed Commons area.